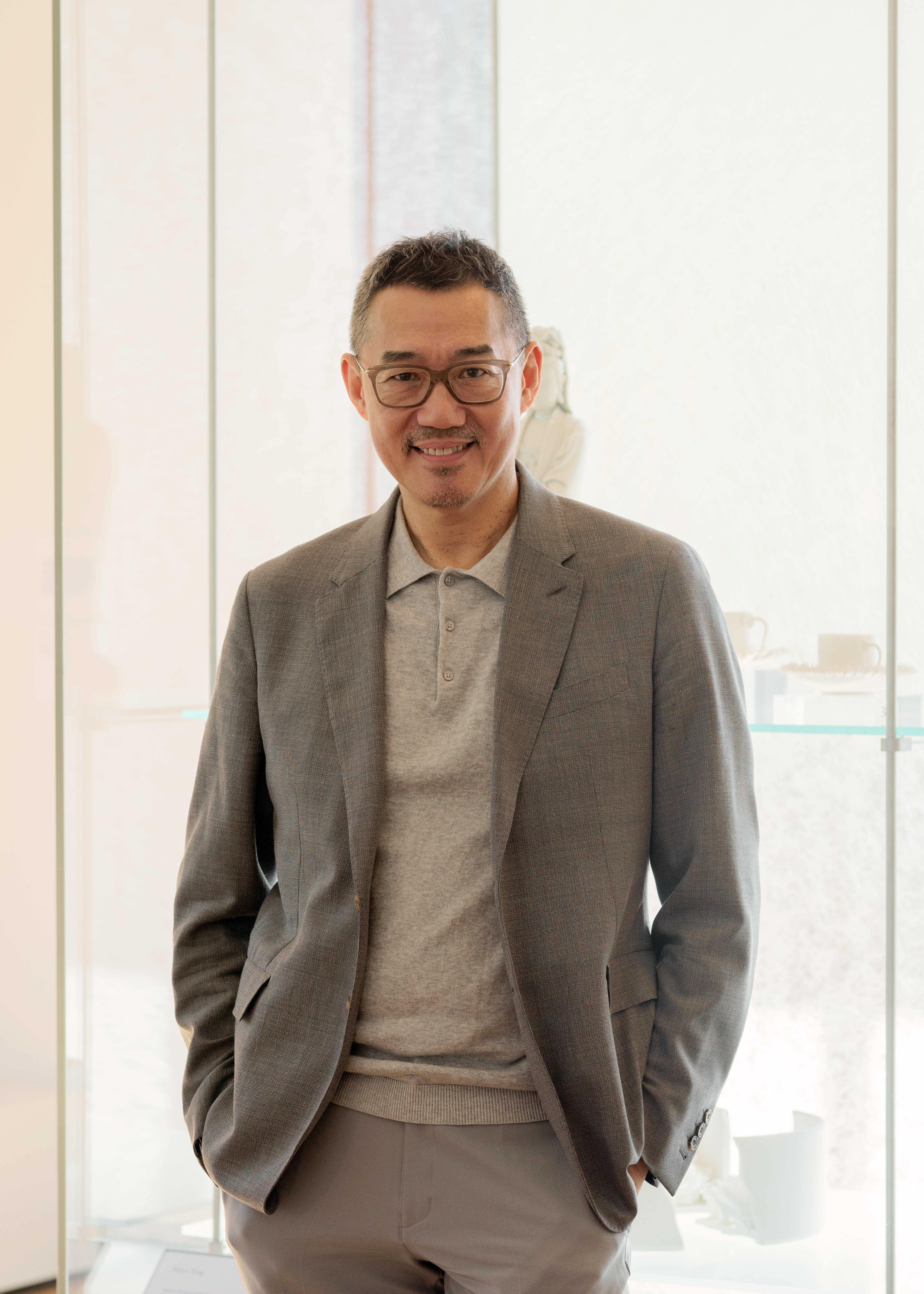 “There are two Peters. A British one, and a Chinese one.”

Born to Shanghainese parents, Peter Ting spent his formative years in Hong Kong through the sixties and seventies. During these seminal decades, colonial Hong Kong remained under the British influence, with its seaports welcoming international trades and varied cultures from Southeast Asia and abroad. Relishing on the diverse cuisines this metropolis has to offer, Peter fondly remembers navigating through the streets exploring authentic tastes as a young boy. This epicurean quest was later translated into Peter’s passion for designing some of the most beautiful contemporary crafts bridging ideologies of the West and the East. Peter said, “I am a ravenous food aficionado. I carry this affection when designing tableware, as ultimately, these functional pieces ought to compliment the presentation of the colorful nourishments.”

This seed for pursuing picturesque design was planted in Peter’s mind when he was only six years old. When visiting a Chinese relative’s home, a group of sangue de boeuf vases presented on a Chinese rosewood bookcase caught Peter’s eye. He was not only mesmerized by the craftsmanship but also the Chinese display ritual: the orientation and positioning of the pieces ought to be adjusted with the seasons. During his first English summer vacation at a pottery studio when he was sixteen, Peter confirmed his fascination with crafting ceramics. “The moment my fingers touched the wet clay sitting atop of the throwing wheel, I knew I would work with clay for the rest of my life.”

The British Peter is many things: he prefers to dress in a tweed suit and makes Waterford Irish soda bread at home. He channeled in all of his Englishness at his first job working for the British heritage brand Thomas Goode as a Managing Director. When he utilized British bone china to re-introduce archival patterns to dinnerware, Peter decided to work with English designs, from hand-painted flowers to opulent gold gilding. Composed of bone ash, feldspathic material, and kaolin, bone china was invented by Josiah Spode three hundred years ago, which became the standard English translucent ‘China’ body. In addition to using this very English material, Peter even turned Prince Charles’ tartan, lord of the isles, into a dinnerware pattern sold at a charity event for the Prince’s Trust in 2008.

Then in 2001, Peter partnered with the venerable British company, Asprey, and headed up their homeware department. This is where he once again explored his forte in bone china. “By referencing Asprey’s archive of botanicals, I designed a classic teapot for Earl Grey, and a big breakfast cup for your early morning English Breakfast Tea - full of caffeine.” The resulting collection screams Britishness that few would have guessed a Chinese designer was the mastermind behind the creations. Being recognized as a critical British designer, Peter received the prestigious “Victoria & Albert Museum Classic Design” award in 2000 and sat on the boards of some of the most respected British institutions such as the Crafts Council and The Queen Elizabeth Scholarship Trust.

When the British Peter met the Chinese Peter

After spending more than half of his life in Britain, Peter developed a keen eye for identifying English elements and mastered its aesthetic language. However, in 2014, Peter had an opportunity to exhibit at the Pearl Lam Galleries in Shanghai for “La France Mandarine.” This exhibition explored the intersection between contemporary art and Chinese craftsmanship. ‍

“La France Mandarine” allowed Peter to explore his Chinese heritage in new ways starting with a trip to Dehua, a porcelain town in Fujian Province. Dehua is known for its acclaimed Blanc de Chine porcelain body that dates back as far as a thousand years. In Dehua, Peter found himself captivated by the hand-crafted techniques of Chinese potters when he visited artisan studios. By collaborating with the local artisans, the Chinese Peter developed a new body of design language.

Each artwork crafted for the Dehua series embodied energy of liveness. Extracting motifs from classical Blanc de Chine porcelain -- buddha and flower, Peter introduced a new expression of dimensionality and drama to the objects. Instead of merely following the form of a traditional Western coffee cup set, Peter added layers of “Buddha Hands” to the saucer plate’s edge. With the impeccably crafted curled fingertips, the set appears full of life, extending the tentacles to reach for something. Peter’s juxtaposition of something extraordinary against a mundane everyday object was also influenced by Méret Oppenheim’s humor when she created the groundbreaking “Object” (1936), which showcased a teacup and saucer entirely made with soft fur. These dichotomies stem from his pursuits of exploring new associations and possibilities, propelling the viewers to engage with the works with newfound sensations. Peter exclaimed, “This is the theatricality that I have been searching for.”

Adhering to the monochromatic color tradition of Blanc de Chine, Peter continued to explore the use of voluptuous forms and pale Chinese glaze throughout his later oeuvre, aiming to reconcile the western design mindset with his inherent Chinese heritage. Through collaboration with Chinese artisan Zha Caiduan, an accomplished porcelain flower-maker in Dehua, the pair created two recognizable bodies of works titled “Flower Cylinder” and “Pearl Vase.” The traditional Dehua flowers from the first series are hidden inside an enclosed cylinder as if its unexpected beauty awaits to be discovered. While in the “Pearl Vase” series, the Dehua DNA of placing pearls onto waves is reinterpreted by Peter through a minimalistic lens – the size of the pearls is reduced to almost minuscule size, yet more than 2500 pearls upon pearls are in symphony with the traditional round-bodied vase.

The exceptional series of “Buddha Hands” and “Flower Cylinder” was later acquired by the Victoria and Albert Museum in London. However, it was surprisingly included in the permanent collection of its China Gallery instead of the Ceramics Gallery. “Now my circle seems to be completed!” Peter continues, “I am being looked at as a Chinese designer, living and working in the UK. The pieces are acquired by a British Institution – honoring the amazing Dehua craftsmanship.”

It is believed that back in 1259, Marco Polo brought the first piece of porcelain made in Dehua to Europe. With Blanc de Chine tableware and Bodhisattva, statues started to arrive in Europe in the early eighteenth century. A sensation occurred throughout the continent where early Chinese pieces were hugely admired and replicated. In 1708, Johann Friedrich Böttger discovered the secret recipe of hard-paste porcelain, and then two years later, Meissen established the first true porcelain manufacturer in Europe. While having mastered studio and industrial ceramics designs in Britain, Peter re-discovered his Chinese roots, which allowed him to approach Dehua Blanc de Chine’s traditional craft with modernity.

When sharing about his journey from the West to the East, Peter could hardly contain himself when describing many of his discoveries in China, “When I come to China, I keep using the word ‘amazing.’ Everything I touch is incredible. It just blows my mind.” As the British Peter encountered the Chinese Peter, it was a moment of epiphany. “I was standing at a crossroad while waiting for the green light. I looked at the opposite side, and there was a wall of people looking back at me. All of a sudden it hit me! I look a bit like them, and they look a bit like me. If they are Chinese, then I must be Chinese too!”

Fast forward twelve years to 2016, Peter partnered with Ying Jian, a forward-thinking porcelain-craftsmanship conservator in China. Their collaboration led to the co-founding of Ting-Ying Gallery, a platform celebrating extraordinary living craftsmanship heritage through contemporary expression and form, where Blanc de Chine porcelain and its history serve as an initial starting point of reference. With an artist residency set up in Dehua, the gallery invites contemporary artists and designers from all over the world to interact with Chinese craftsmanship, steering to define new ways of thinking, making, and producing. A selection of these contemporary craft objects was chosen for the “Blanc de Chine: A Continuous Conversation” exhibition at the Victoria and Albert Museum, which opened during Fall 2019 and will conclude this year. By bridging the past and present, tradition and innovation, the exhibition seamlessly weaves Blanc de Chine into an international and contemporary dialogue.

When addressing Peter Ting in his Mandarin Chinese name, it phonetically reads dīng nìan zǔ. As each Chinese character embodies its unique literal connotation, the name translates to someone who honors the wisdom and tutelage of one’s ancestor. Amid randomness in the incalculable fate, maybe it is contemporary craftmanship that chose Peter after all. Balancing the duality of Western and oriental influences, Peter is dexterous at discussing Chinese literati poetries alongside debates over western design ideals. This merge of two Peters and two cultures only allows him more freedom and confidence to absorb the traditions and establish new boundaries. 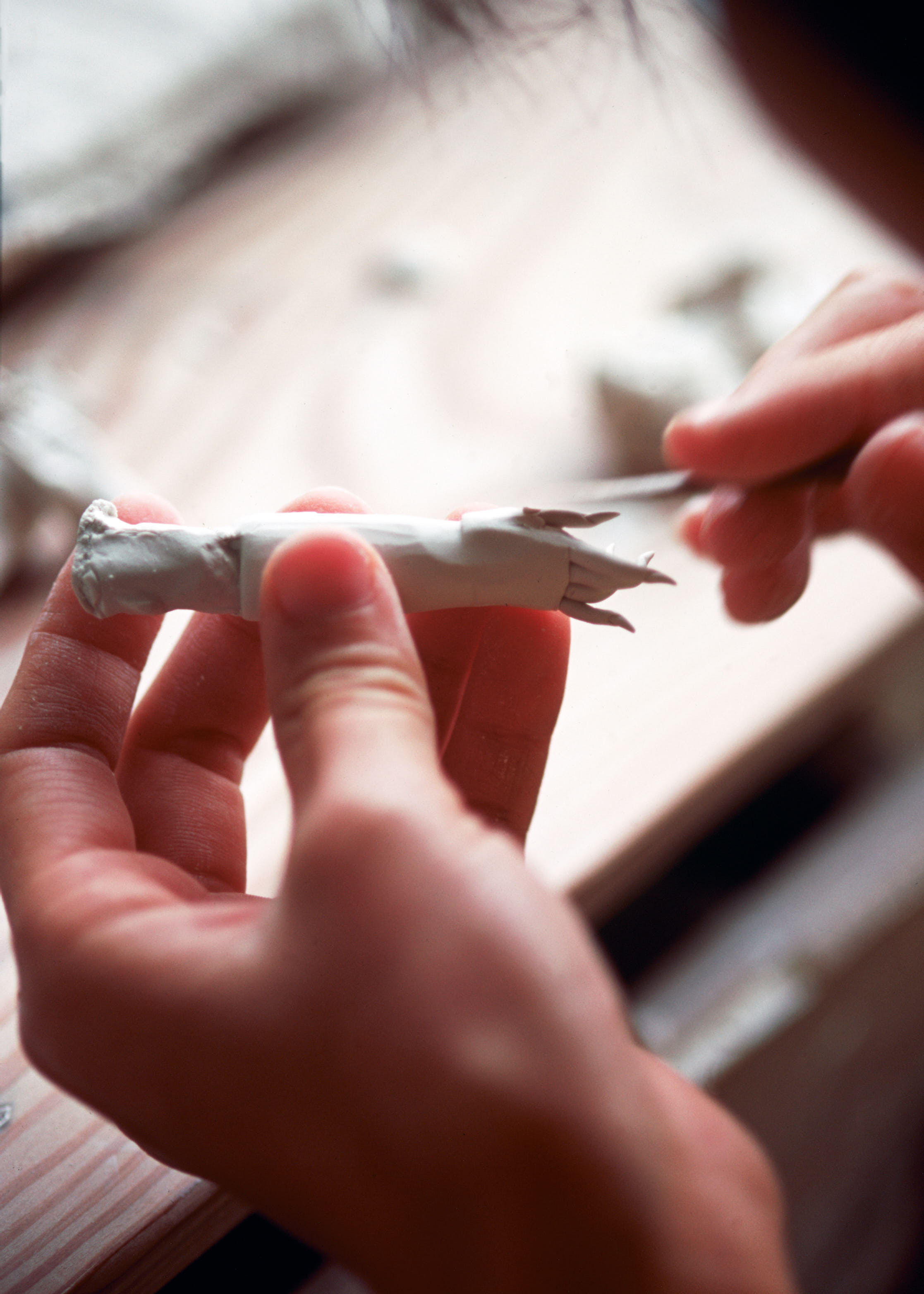 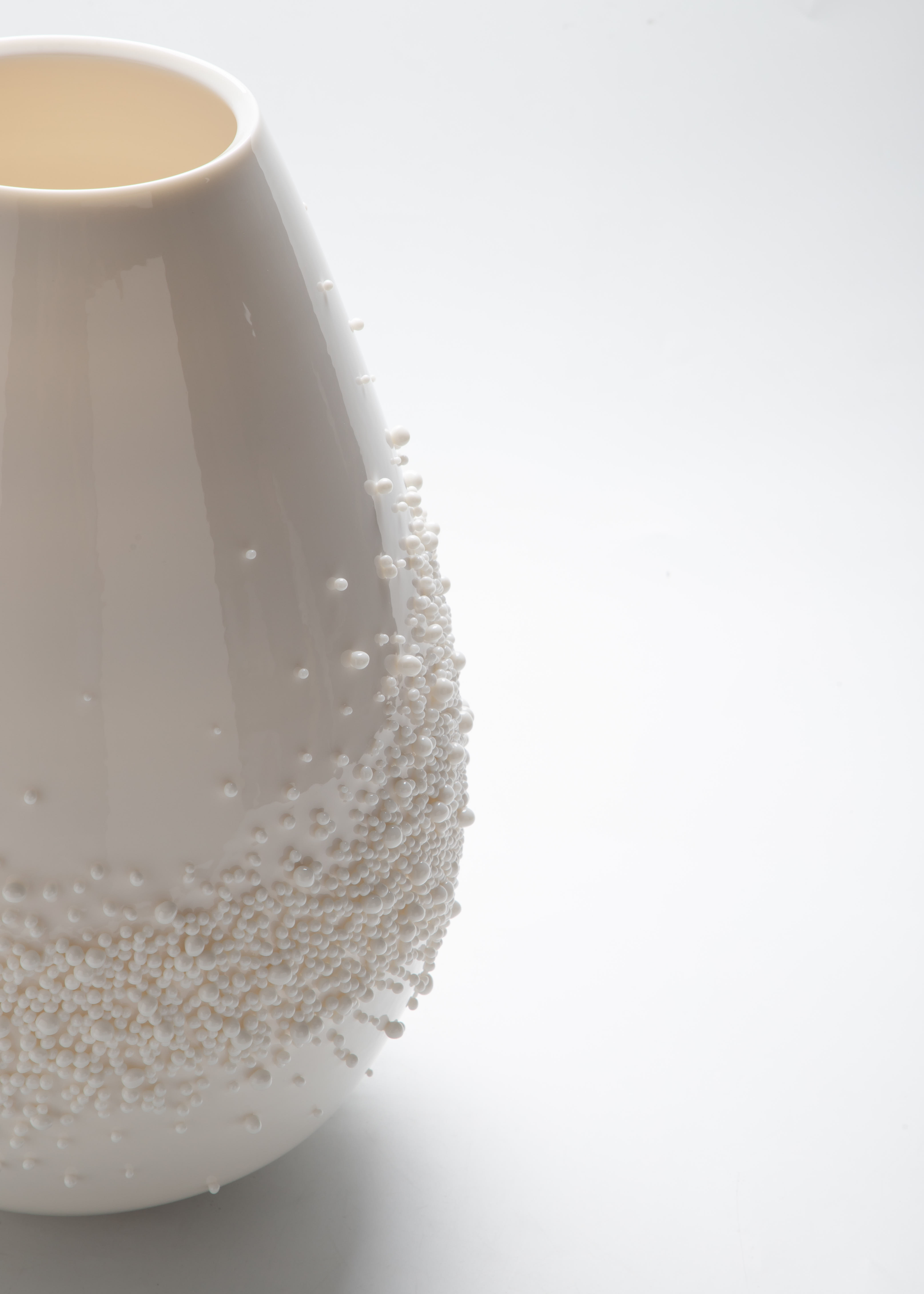 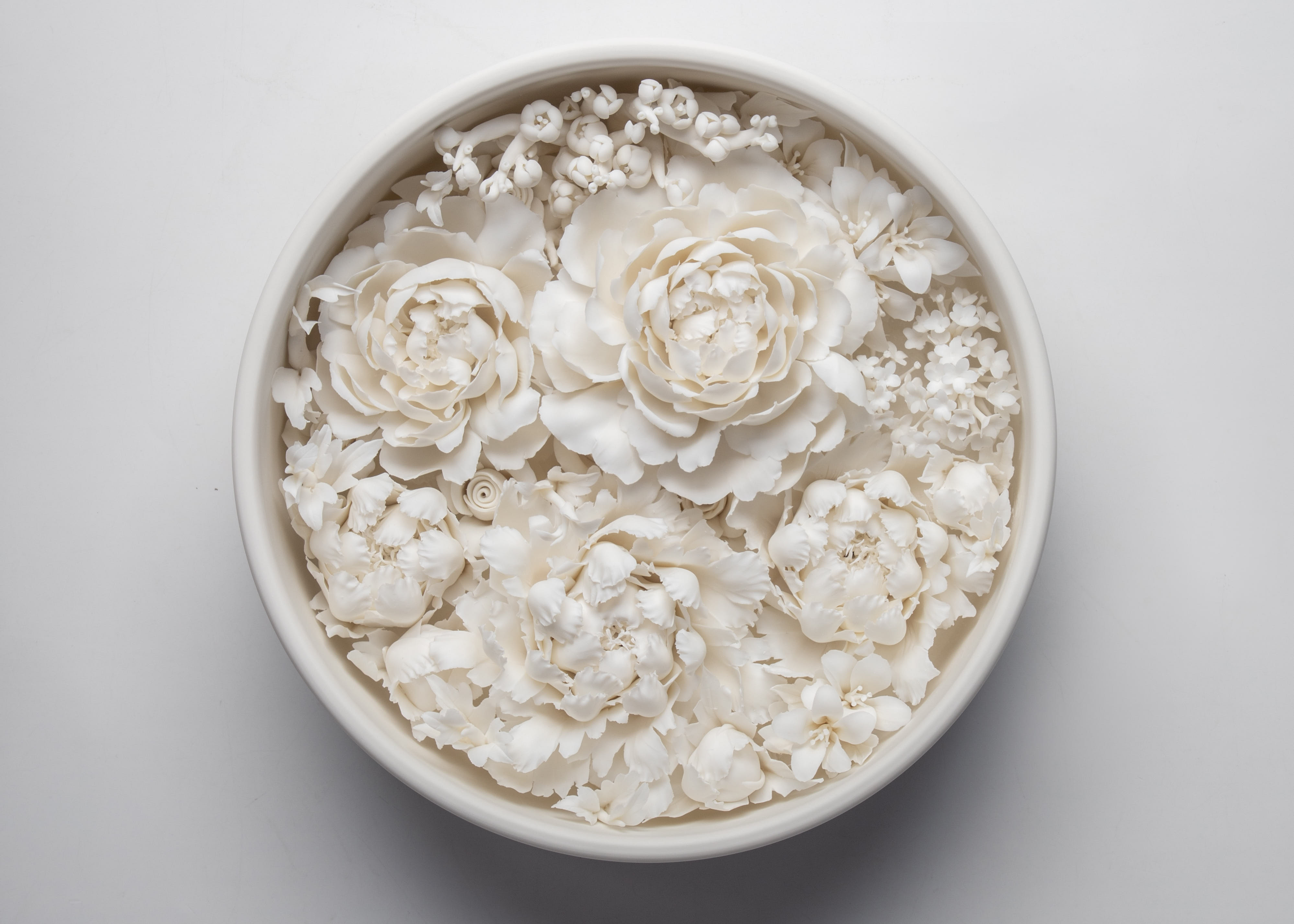 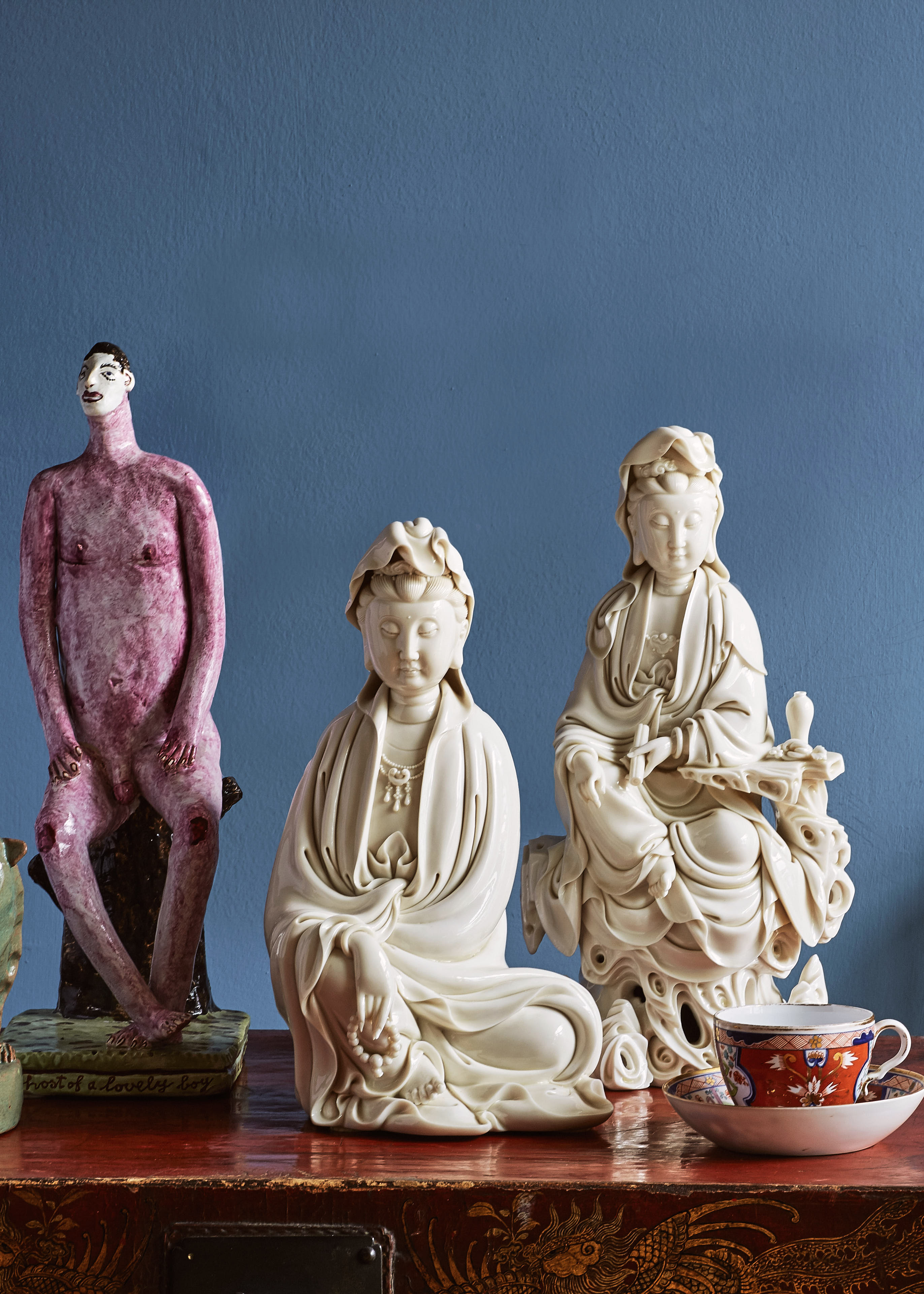 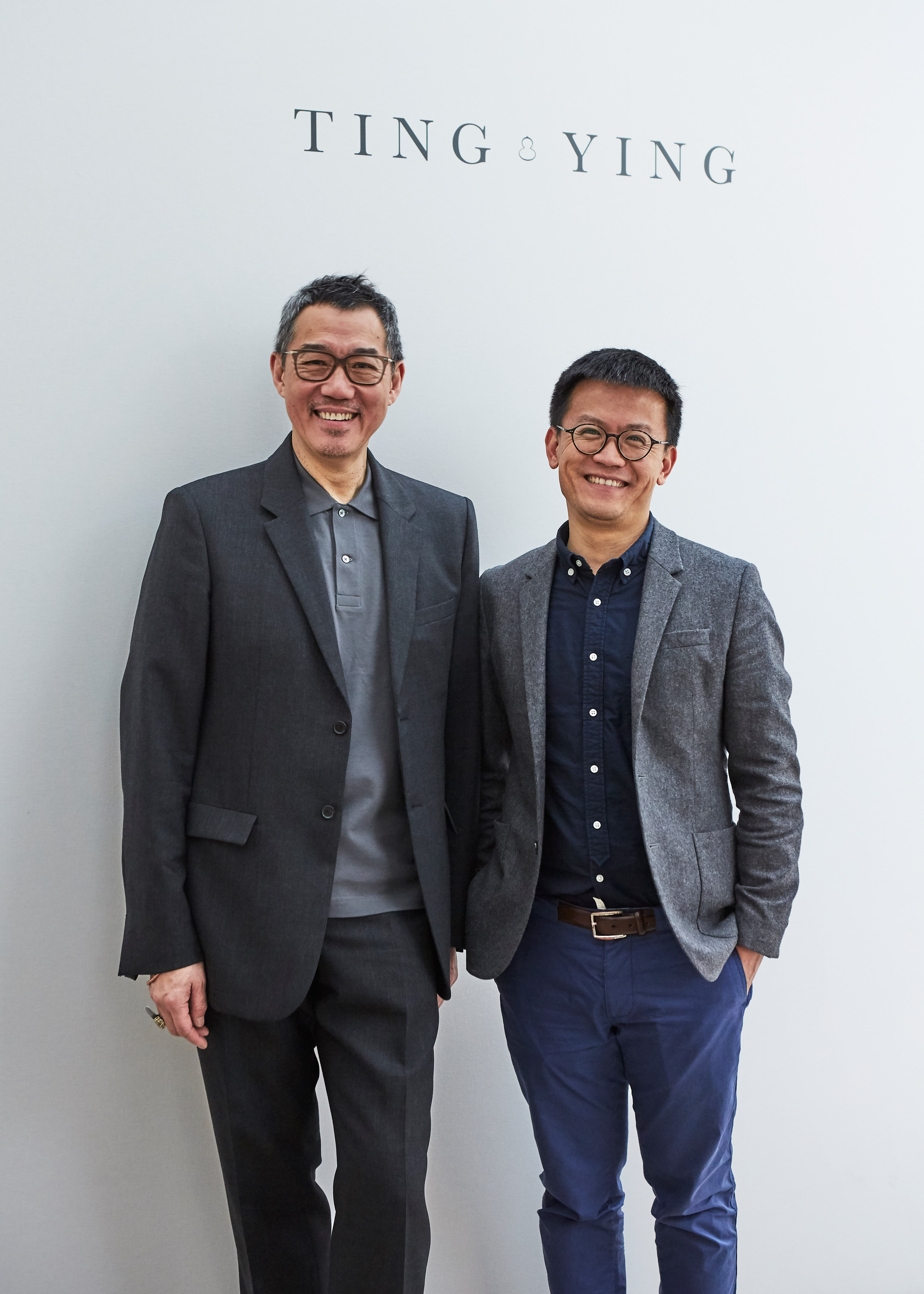 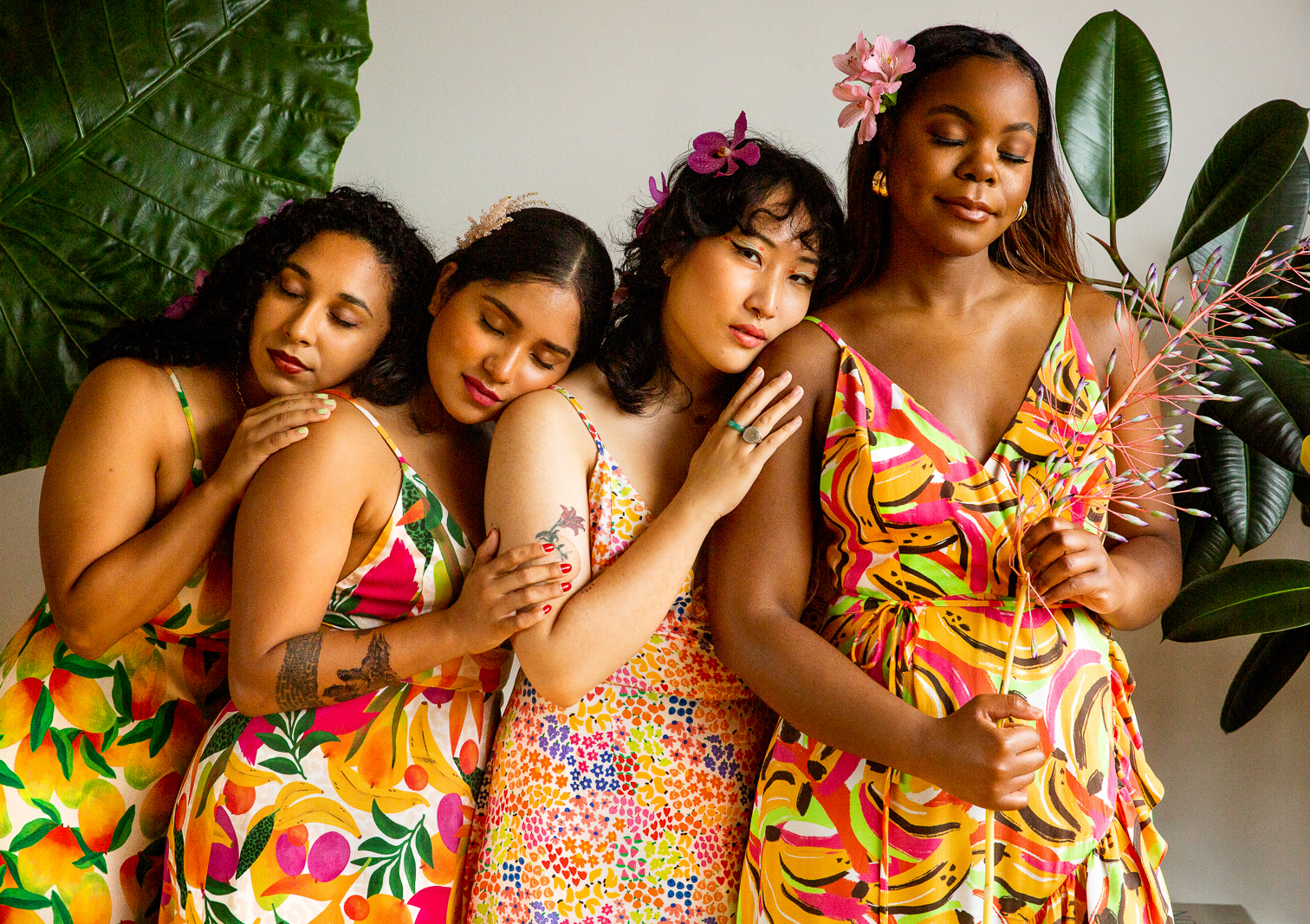 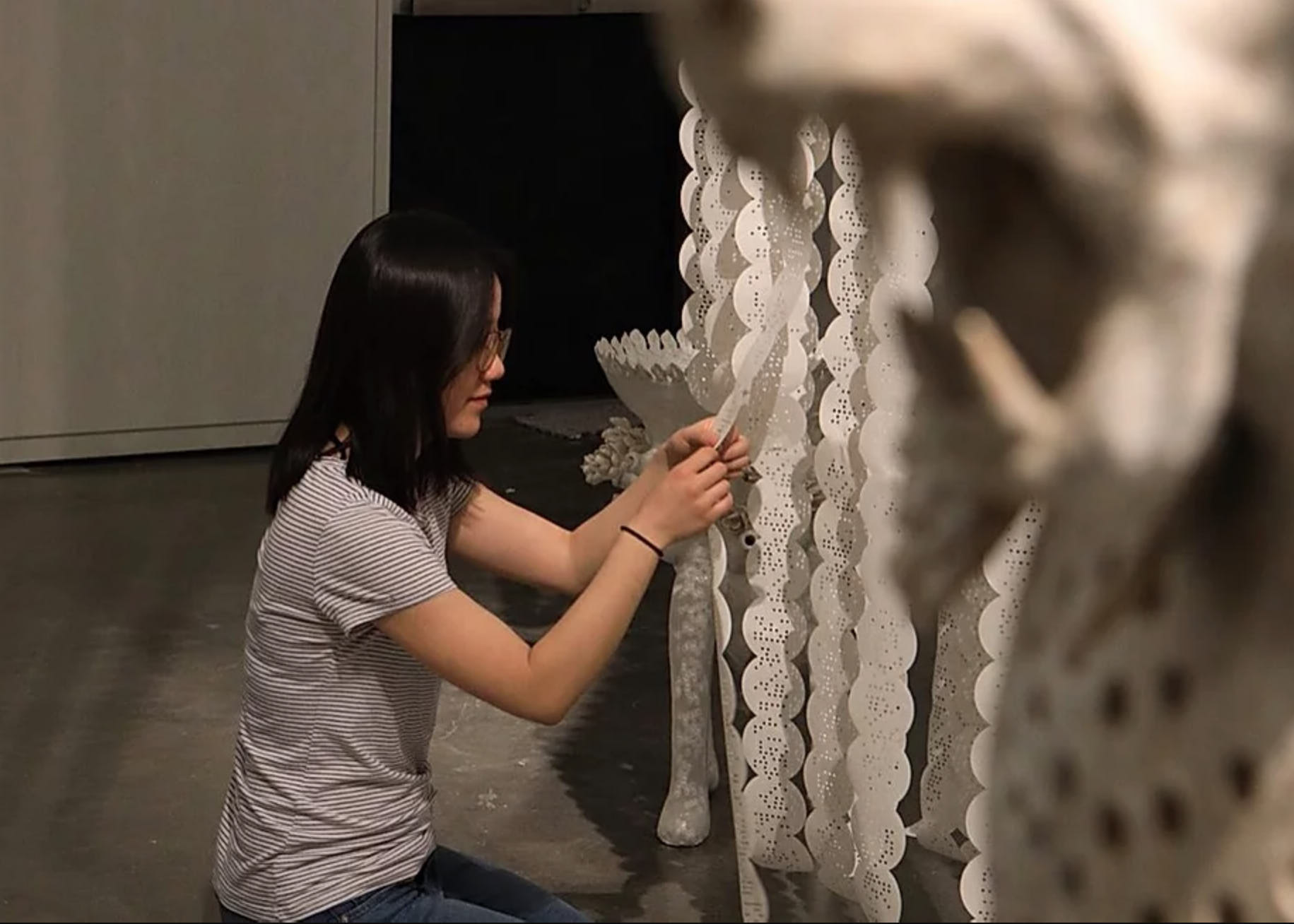 Art inspired by emotions and nature 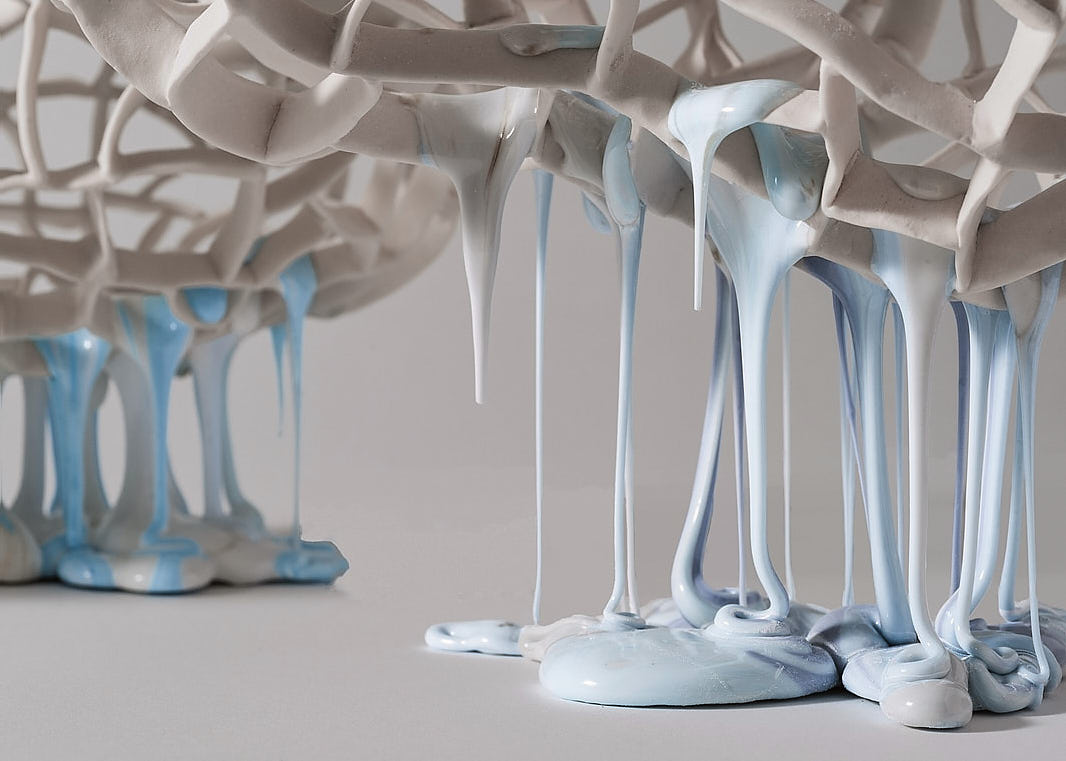