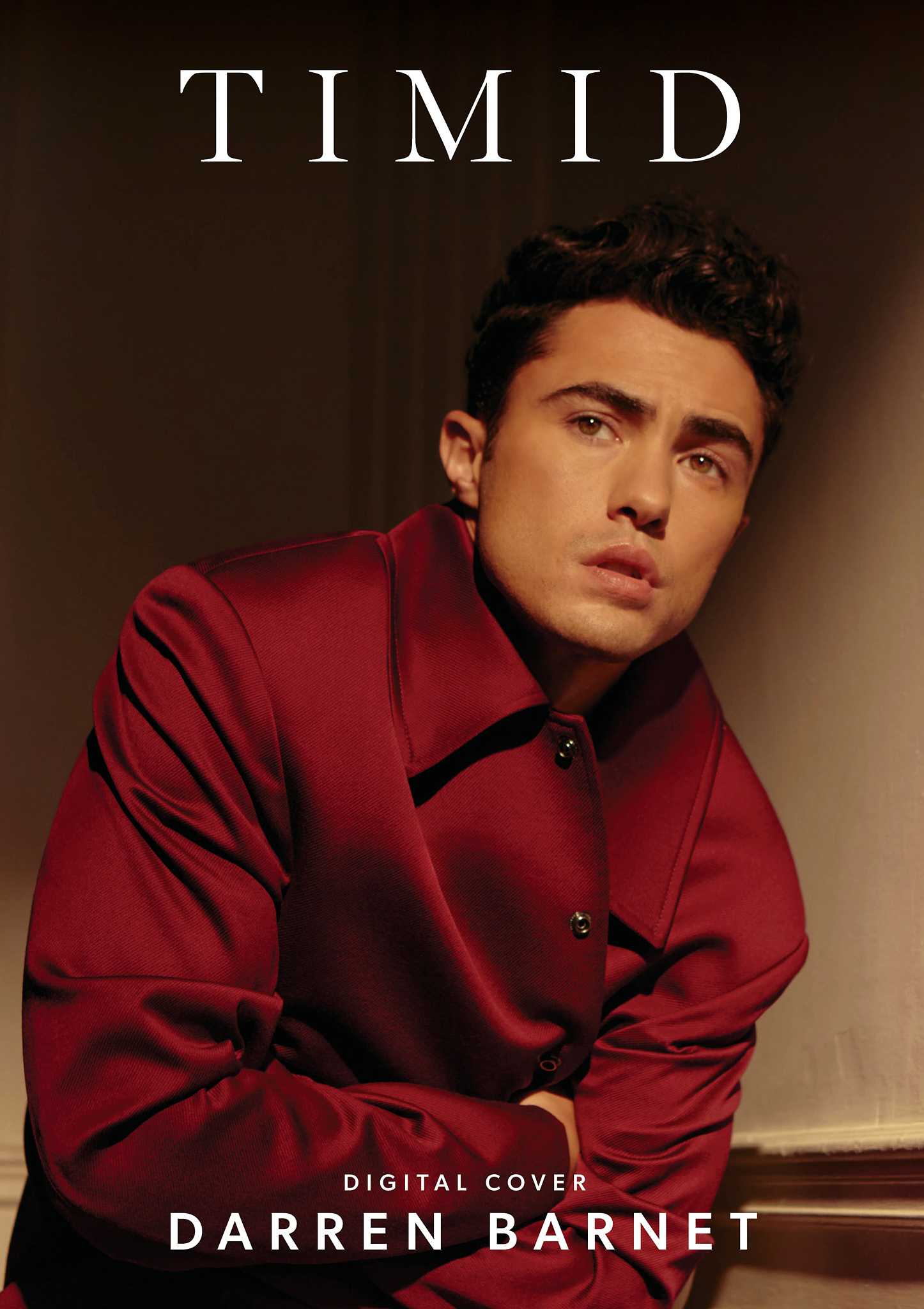 I was staying at my parents' house when I was told that I would be interviewing Darren Barnet the next day. I only had two tie dye t-shirts with me and a pair of gym shorts. Thankfully my mom and I are the same size so I went into her closet and found a more suitable sweater to wear for the interview. The following morning, as I sat in the virtual waiting room, I had butterflies in my stomach like I was about to talk to the most popular boy in high school who didn’t even know I existed.

I carried these butterflies throughout the interview until I heard Barnet’s response to a common misconception people have about him: “A lot of people say ‘before I met you, I thought you were really intimidating.’ I kind of always have a concerned look on my face. I don’t know why; it’s like a permanent smolder sometimes but I am quite nice and personable.”

I didn’t admit that I, too, fell into this category of people who found Barnet super intimidating, and his role as Paxton Hall-Yoshida in Netflix’s Never Have I Ever doesn’t help his case. In the show, Paxton is the popular boy in high school who initially had a slight air about him that he doesn’t care about anything.

However, as Barnet notes, “Every character [in the show] has a . . . backstory, has a purpose, has more to them. . . . Nothing defines that character just by that label.” So it’s unsurprising to learn that Paxton is more than what appears on the outside, similar to Barnet himself.

In real life, Barnet claims that he relates to Devi the most and spent a majority of his time in high school focusing on education. “I never went to one party, never took one sip of alcohol, I was not like any of the characters in the show. . . . My schedule was getting up at 7 in the morning, going to school all day, going to practice for whatever sport I was playing, coming home, doing homework until midnight and going to bed.” 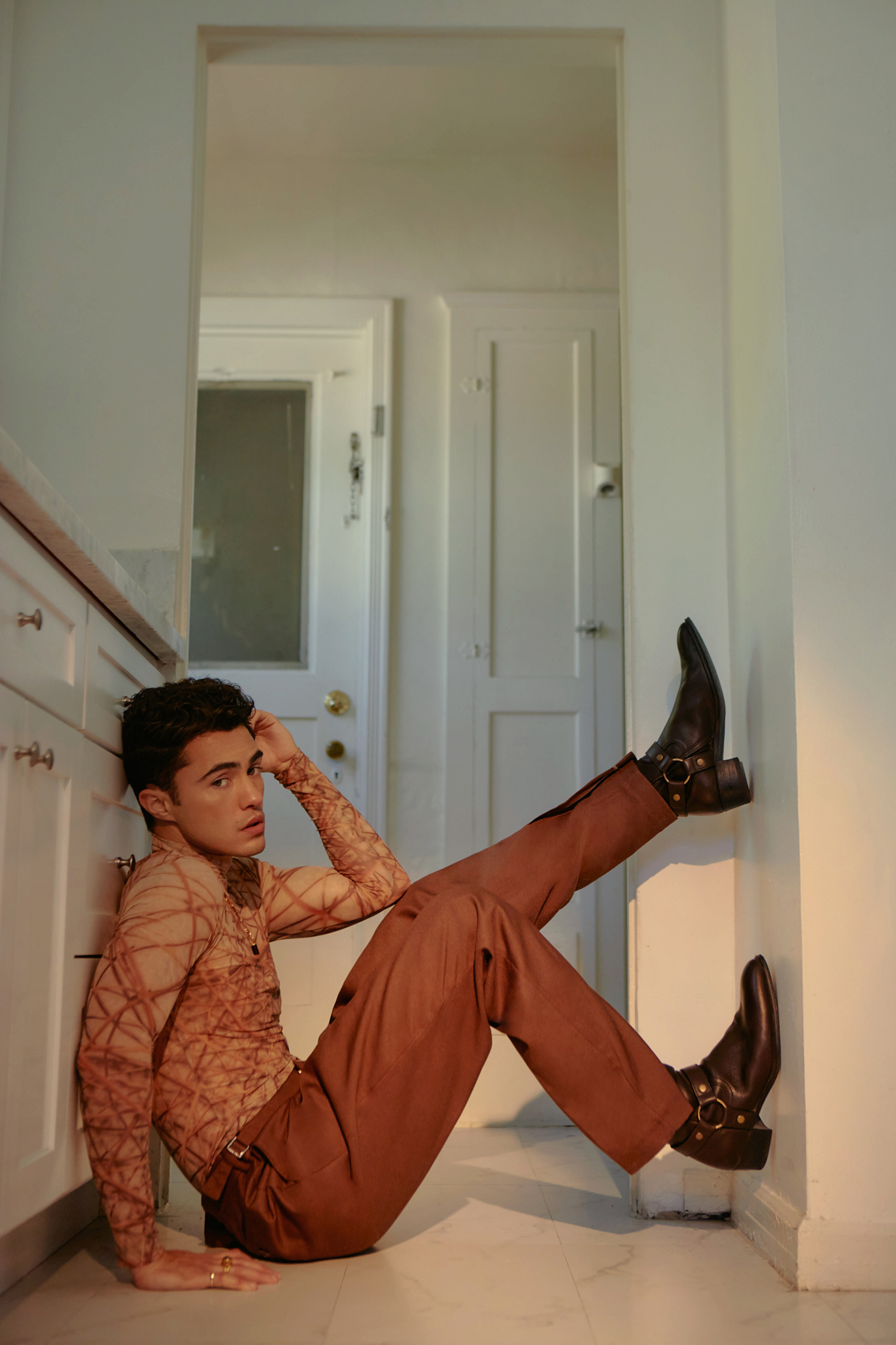 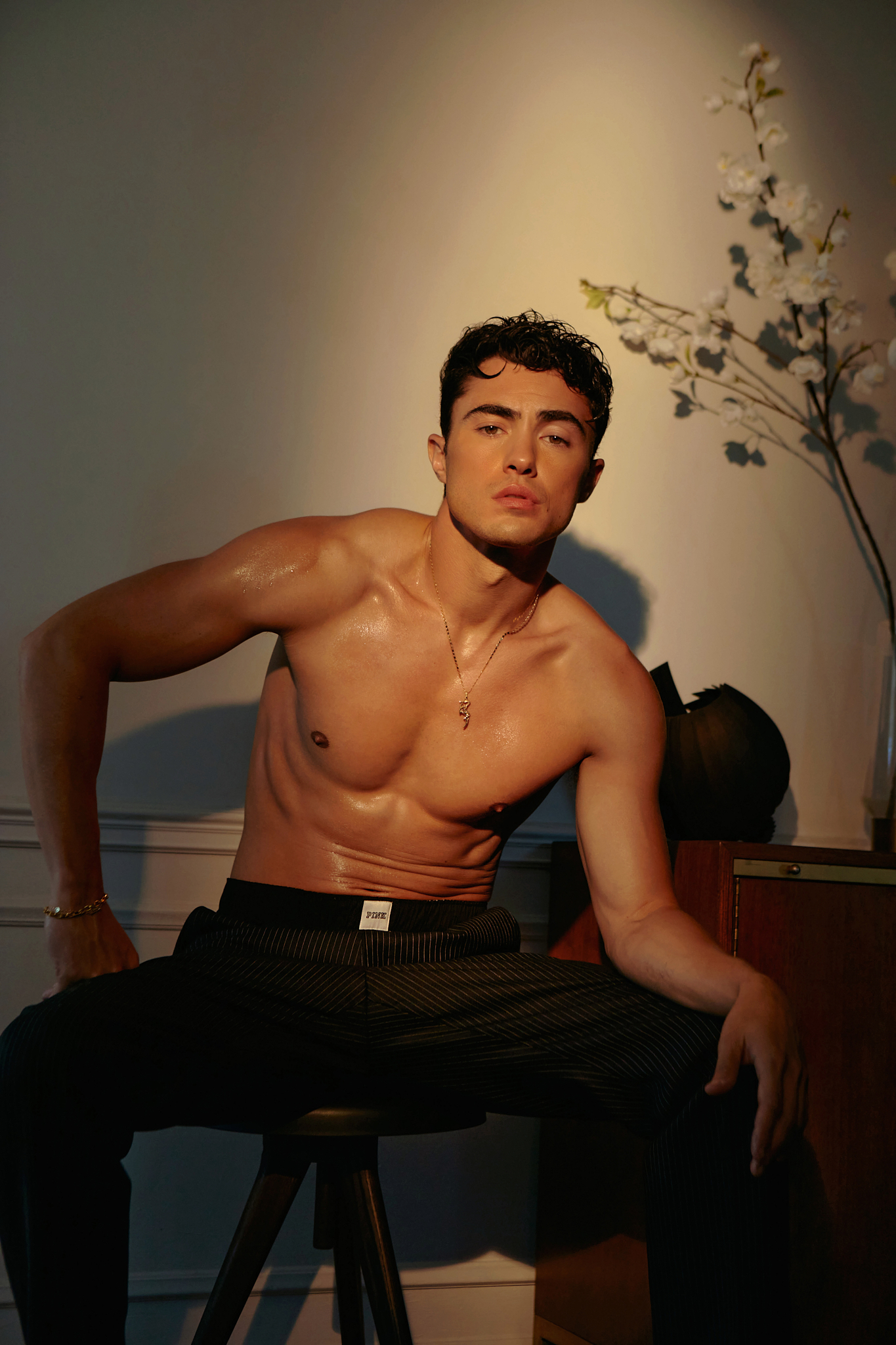 “Having a very Asian mother when it came to matters such as college and getting a good job, I was the first in my family to graduate college and it was a very proud moment,” Barnet shares. His mom was skeptical about him wanting to pursue acting initially but has now become one of his biggest sources of inspiration to keep pushing. The turning point for her was seeing Barnet be told “no” hundreds of times but still having a fighting spirit about it, often skipping out on lunch breaks to make auditions. She could see it wasn’t just a phase or a means to become famous.

Barnet recounts a time when he broke down to his mom wanting to quit because, “I just couldn’t take it anymore. I was broke, I didn’t have health insurance.” His mom replied with, “You can’t quit something you haven’t actually started yet.” And that’s stuck with him ever since. It still took another 5 years before he began acting as a career, but throughout those years his mother was fully behind him.

At the start of Barnet’s acting career, he didn’t lean into his Japanese heritage much. However, he was speaking in Japanese with the assistant director at the time, who he calls his 'fairy godmother,' and the team decided to make his character represent his real life persona more. So Paxton Hall-Yoshida was created.

“I’ve always been proud of [my Japanese heritage] but I think it’s really given me an avenue to really, really be proud of it and made me more inspired to dive into the culture more: relearning Japanese, trying to learn about my family in Japan—I can’t wait to go and meet them. So it’s been a huge blessing and I’m so thankful to the show for that. It’s also opened up a lot of doors.”

Barnet describes being multiracial as not having a box to fit into because your looks may not always give away your racial background. “Not having a box is a whole box in itself and I’m proud to hopefully give a voice to that.” He adds, “I have so many different cultures that I am inspired to learn about. . . . It’s really cool to have so many things to draw from when I'm forming my identity.” Now that he finally has enough financial means, he’s looking forward to being able to visit some of his family in Japan for the first time.

When asked, “What are you?” Barnet replies with, “I say it just how it is. I say I'm Japanese, Cherokee, German, and Swedish. . . . It’d be fun to say [everything I am] but I think that just gets obnoxious.” Never Have I Ever has effortlessly normalized diversity and inclusion in Hollywood and has brought comfort to many viewers around the world. While Barnet’s multiracial identity has never outright made him feel less than while growing up, it left him in a state of feeling boxless. But his role as Paxton Hall-Yoshida has led to more opportunities to showcase his unique identity and inspire others to realize being boxless is a box itself. It’s led to roles in animations based in Japan, samurai culture, and he’s even gotten to speak Japanese in some of them.

In addition to his lead role in Never Have I Ever, Barnet is also Victoria’s Secret PINK’s first celebrity male brand ambassador to promote their Gender Free collection as the company moves to be more inclusive and diverse. Through this collaboration, he hopes to support the brand’s mental health and purpose-driven initiatives. His role as Paxton Hall-Yoshida has given him a lot of confidence in his personal life that he wants to help bring out in others.

“I had the opportunity to be a judge for [Victoria’s Secret PINK’s] annual PINK with Purpose Project that awards ten young adults with $25,000 each. I’m excited about the fall campaign, The Next Chapter. This campaign is all about taking care of yourself and embodying ‘main character energy.’ . . . I certainly wish I began work on my mental health at a younger age.”

PINK’s mission is to help young adults have more honest conversations about mental health. Barnet believes that “open dialogue is so important, because it makes you realize how many others feel the same way and it helps us all connect as people.” He adds, “I wish it was more understood that no one is too young to begin focusing on mental health and how to harness it.”

It was comforting to hear about Barnet’s connection to mental health. By the end of the interview, I felt a lot calmer after hearing Barnet’s experiences growing up multiracial, his struggles with starting his acting career, and his perseverance stemming from his mother’s advice and constant support. At that time, he was just focused on his education and wasn’t the confident, suave Barnet we see today; he isn’t so intimidating, after all. It reminded me a lot of my own mother and how I am where I am today because of the values she instilled in me and her encouragement to follow my dreams. Seeing Barnet embrace his Asian background and his connection to his mom made me proud to have been raised by my Asian mother; it wasn’t hard to be reminded of that as I sat there wearing her sweater. 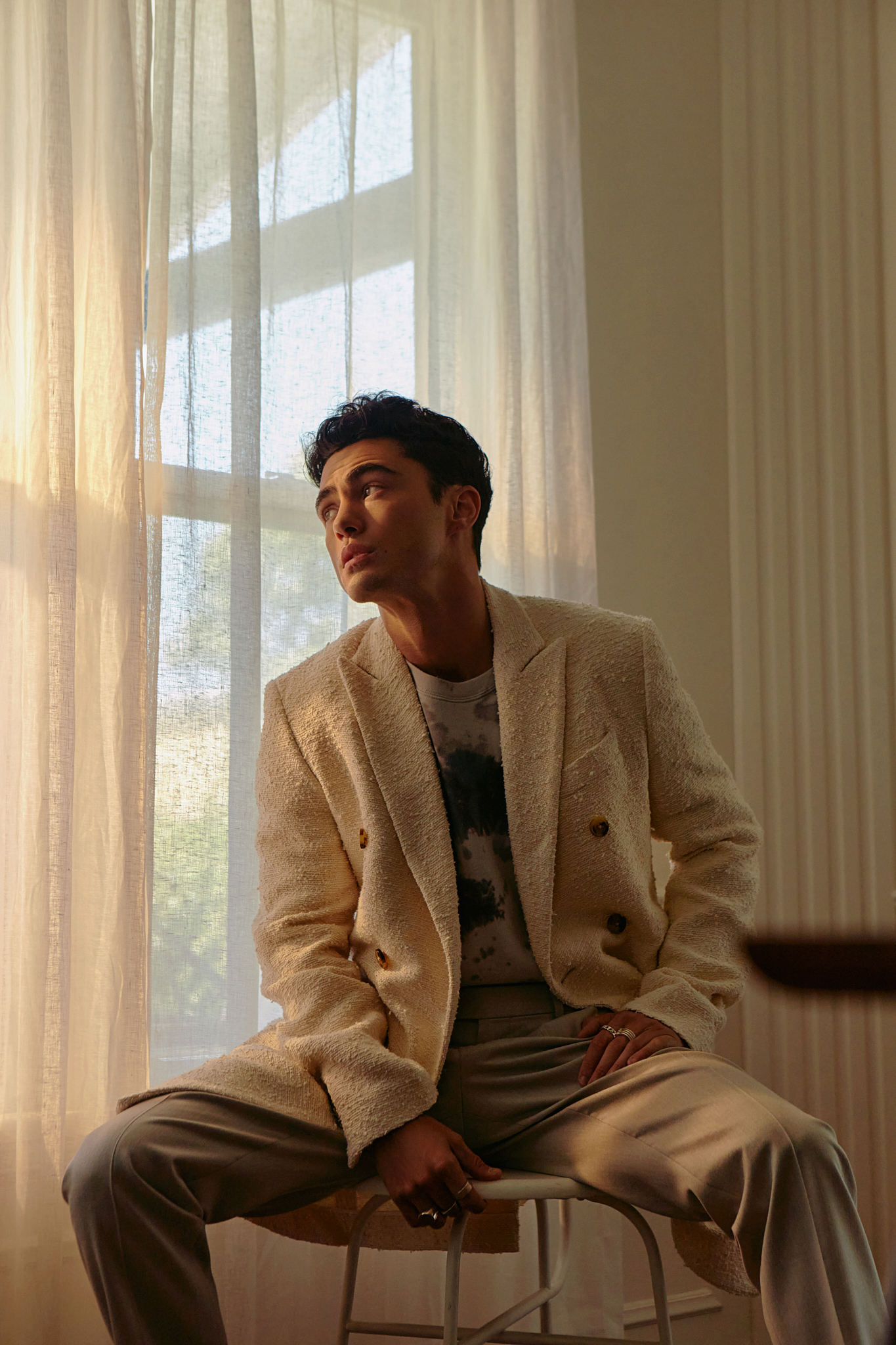 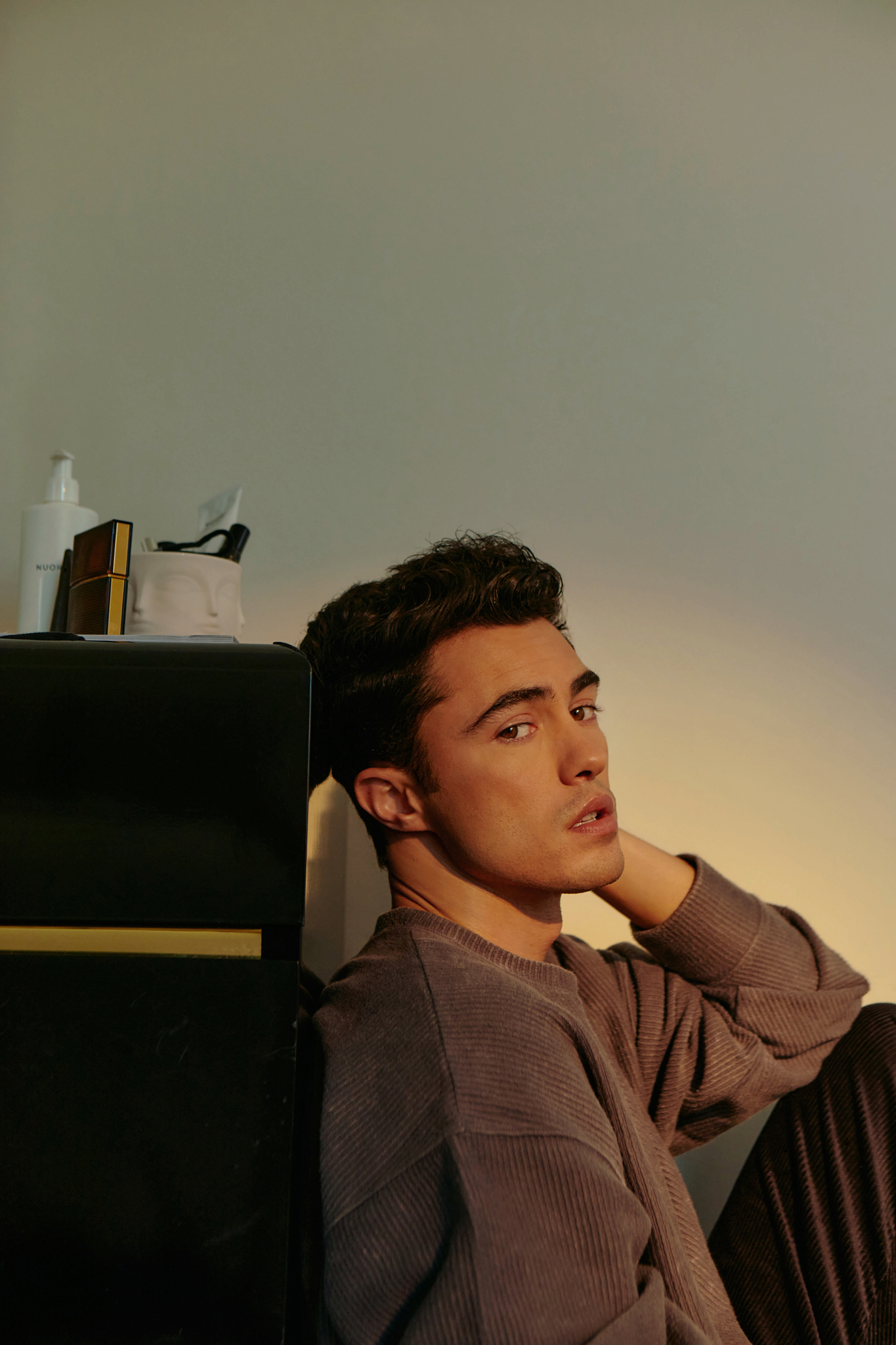