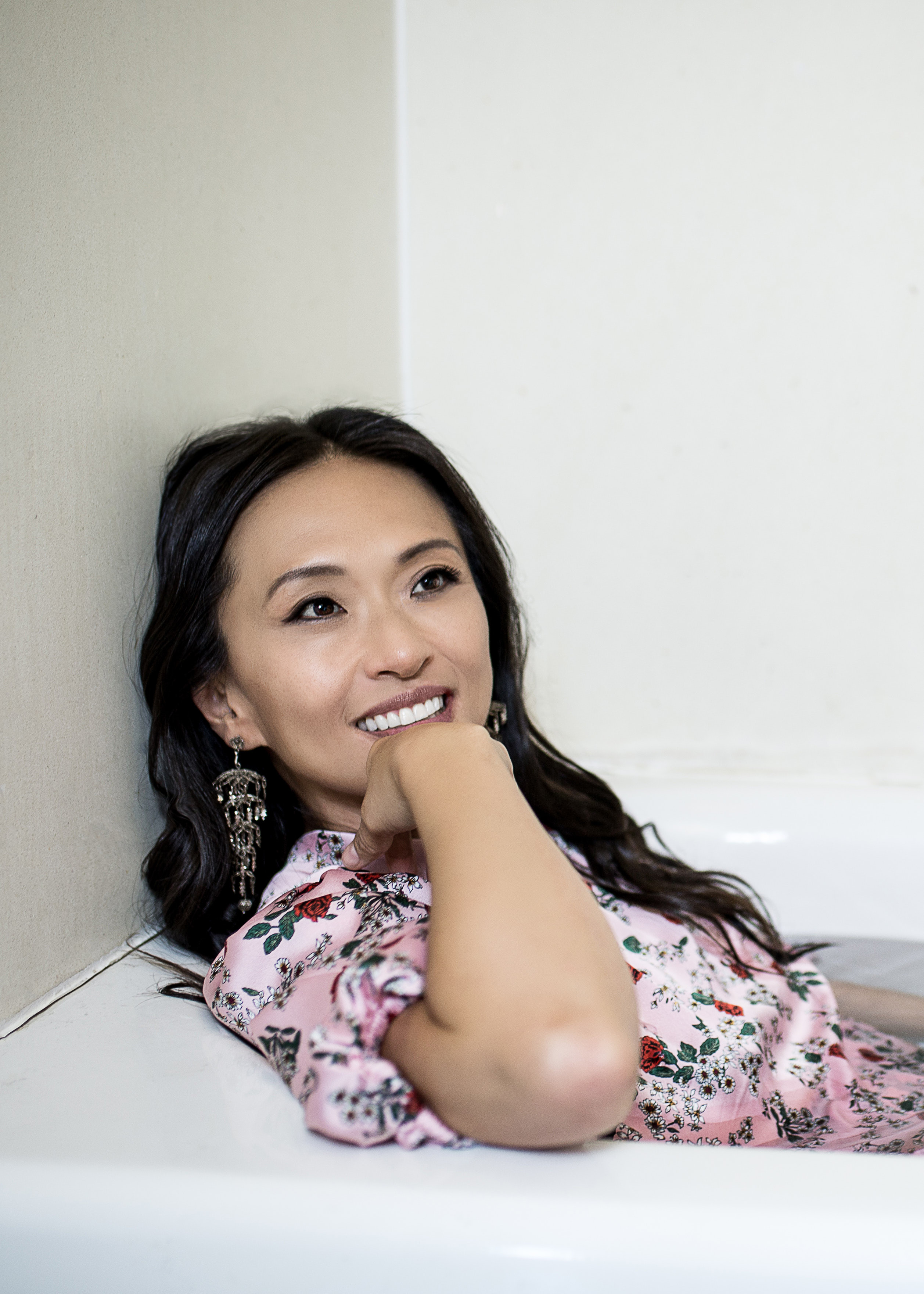 A Korean American actor, dancer, and one of Hollywood's hardest working moms

Joy will be seen in the action-packed DC Universe & CW’s Stargirl as the infamous villainess ‘Paula Brooks,’ aka ‘Tigress.’ Best known for her skills in hand-to-hand combat and extensive weapons background, ‘Tigress’ is one of DC Universe’s deadliest non-superpower villains. From the original creator and comic book writer Geoff Johns (Executive producer of Titans, Arrow, Batwoman, and The Flash), Stargirl follows high school sophomore Courtney Whitmore (Brec Bassinger) as she moves to Blue Valley, Nebraska after her mother remarries Pat Dugan (Luke Wilson). After learning her stepfather used to be a hero sidekick, she becomes the inspiration for a new generation of superheroes. The live-action superhero drama reimagines the 1999 Stargirl comics and the very first superhero team, the Justice Society of America, in an unpredictable series.

What does heritage mean to you, especially from a cross-cultural lens?

As an adoptee, my heritage has often felt amorphous. There are facts about me: born in South Korea, in an orphanage at 2 months old, adopted at 7 months old by white parents, raised in a dominantly white community. In terms of a birthright, I should speak Korean, understand Korean culture, feel at home with being Korean. But of course, for so many Korean adoptees and me, our existence lies more in the grays than the black and white. My parents were pretty damn woke-my mom made bulgogi, I had a little hanbok, my parents said Ahnnyeonghee jumuseo to me before bed. My adoption was always celebrated, as was the Korean culture. But the opportunities to interact with other Korean Americans were pretty limited. And really, I just wanted to be a normal kid. I didn’t make my first trip back to Korea until I was 30. So for me, the process of defining heritage has been a lifelong discovery, and it continues.

I’m so proud of being Korean and fully claim my identity as an adoptee. In many cases, I’ve found that issues with heritage tend to come from other people’s biases and ignorance. Growing up with an Asian face and a Polish last name means I try not to make assumptions about anyone.

As a parent, I’m an Asian American mom with a white husband, a white step-daughter, a black son, and a bi-racial daughter. Heritage means giving space for all the histories.

How did your early years or childhood define your career path as an actor?

I was so fortunate to have parents who nurtured my creativity. My parents had traveled a lot before having children — my dad grew up all over the world — so our little suburban home was filled with artifacts from places like Thailand, Vietnam, and Greece. That and a huge stack of National Geographic really primed my curiosity about other people. My mom loved opera and classical music, and my dad was always reading. Without even knowing it, they created a strong foundation for the arts and a passion for self-expression. Now that I’m a parent, I look back on my parents’ patience and tolerance with me as a kid, and I’m in awe of them. As the older sister, I was definitely a “good girl.” I wanted to impress and please the adults. But I was a handful, too — I used to argue so much my dad would gently encourage me to become a lawyer. Ha! So much for going into a stable profession!

You’ve transitioned from graphic design to acting, how have these two roles influence one another?

Both fields came as a surprise to me. I was still in college studying creative writing and Studio Art when I spent a summer assisting an Art Director of some magazines in Boston. She then went on maternity leave and subsequently decided to be a full-time mom. So the publishing house asked me to come back and take on that position. I was like, seriously? I had just graduated from college and found myself, at 20, the Art Director for about 14 international magazines. “Winging it” took on a whole new meaning.

After I moved to the Bay Area, I started my own graphic design business and worked a lot, but found something lacking. It was so hard to put a finger on what it was until I realized I missed being part of a group collaboration, a group performance. I’d danced from the time I was little, through college, and always loved the process of developing a show. But dancing wasn’t what I was drawn to at that point. Then I saw an audition posting for a community theatre production of Our Town. I didn’t have a monologue, so I found a piece of prose I loved, memorized it, and went to the open call. Playing Emily in Our Town was like flinging open locked doors of a skyscraper. Suddenly, all these rooms, floors, and floors of them could be explored.

Looking back, it was a dissatisfaction in one creative field that led me to pursue another. Again, I think I organically gave myself permission to make that move because of my parents. My dad always said, find something you love doing so much, you’d do it for free. Well, I’ve acted for free plenty of times, so he must have had a crystal ball.

What elements of your Korean heritage have you brought into your passion, whether it is acting or design?‍

As I’ve learned more about Korean culture, it’s been fun to see ways in which I’m Korean that I wasn’t even aware of. Of course, many of these traits are universal. What mother doesn’t want to put food into her children’s mouths? Koreans just do that literally. This idea of “hwaiting” (fighting), this concept of going boldly and bravely...that’s something I strive to do in all aspects of my creative life. I’m currently narrating a fantastic audiobook by Stephan Lee, KPOP Confidential, and a character uses the phrase seoru akyeo joh. Take care of each other. That pretty much says it all.

With all the accomplishments you have achieved, how have you learned when to break the rules and when to follow them?

This is a wonderful question. Because immediately, you have to gauge where you are on the rule spectrum. Is a rule something that’s dictated by society? Mandated by your workplace? Written in a handbook? Passed down from generation to generation? Rules can come with a negative connotation — that they’re restrictive, strident. For me, building a set of rules to live by means an ever-shifting structure. And the rules I’ve found to be helpful, even inspiring, are sometimes that way because of their limitations. For example, I narrate audiobooks. On paper, it sounds pretty simple: you just read out loud. But try doing that for hours at a time, alone, making as few mistakes as possible, sitting in one place, keeping very still, so you don’t make an extra sound. The physical parameters mean your creativity has to flow differently. My voice is the primary tool I use to tell the story, express the characters. Instead of using my entire body and voice to create a visual world, I’m compelled to paint the aural canvas with vocal choices. It’s a lovely challenge.

There’s a rule in improv-you always say “Yes, and” to anything that’s thrown at you onstage. It’s incredible to be given permission to take anything, not judge it, and just run. But sometimes, in life, it’s very, very good to say No. I’m like a lot of actors, we want to please. But what I’ve found is that saying no to an audition or a job that I have an issue with, or that doesn’t feel right, can make a huge difference in my sense of empowerment. When I first started working in LA, I told my agents that I didn’t want to be jammed into an Asian stereotype. So that meant saying no to opportunities I might have had right out of the gate. But I was fine with that. My goal was to look back on a career of varied and diverse roles. If that meant it took a little longer to get going, all good. Then the first TV role I booked was Darcy in The Loop on FOX, and I was so grateful for that first experience because she was just a character, undefined by ethnicity. I got to develop her with the show creators, and that was incredible.

What values or traditions have your parents instilled in you that you want to pass on to your children?

Love and respect for other cultures. A deep curiosity and humility about things you don’t understand. Compassion for others and patience with anger. But also the strength to take a stand, to defend the truth. To listen. To speak up. To love. To respect myself.