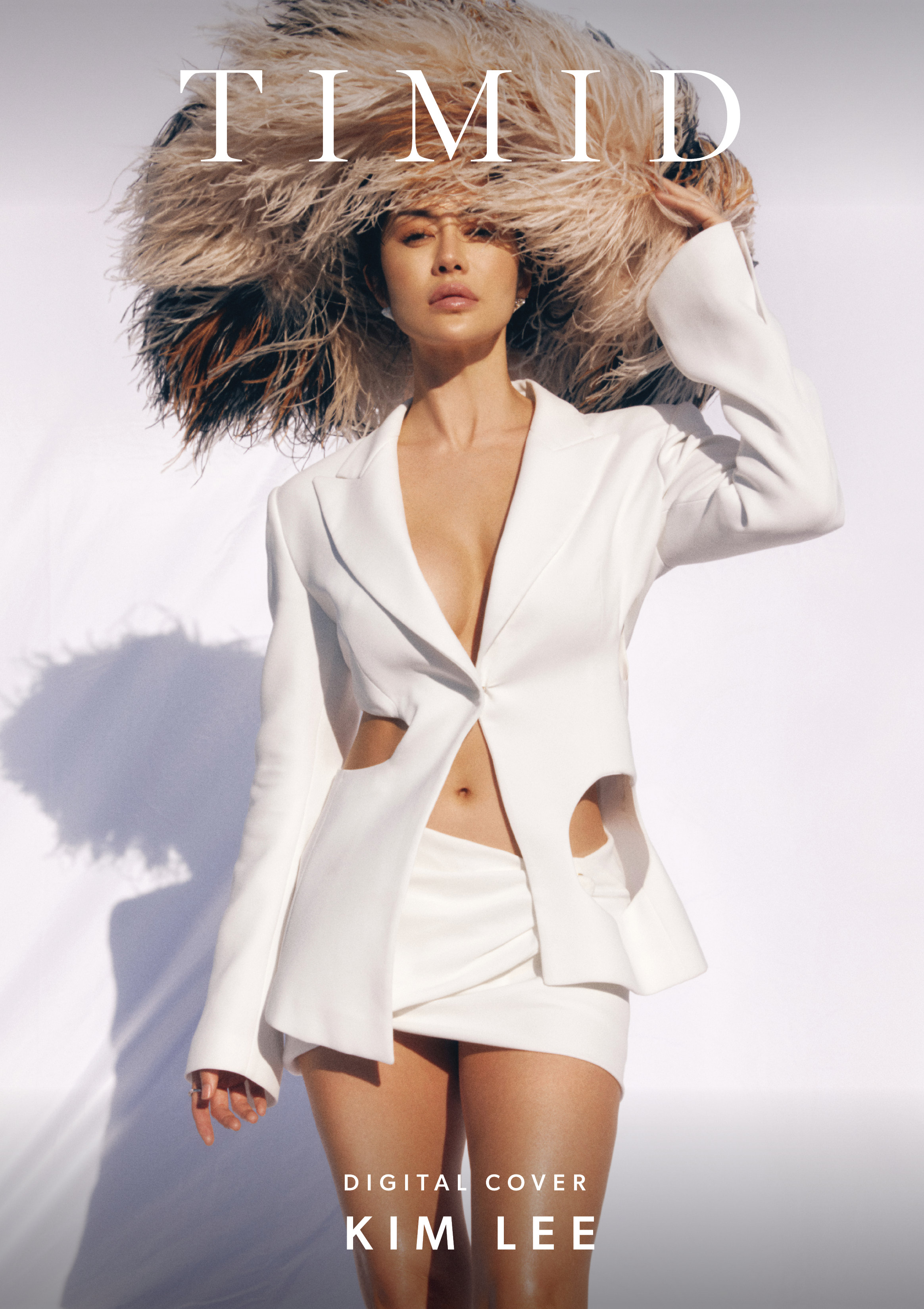 Picture this scene: A raven-haired woman and her friend attempt to perform a spiritual cleanse at a friend’s mansion. They enter a bathroom where they discover a penis pump in one of the showers. Disgusted, she instructs her friend to toss it out of the window, laughing as it lands on the ground, shocking and horrifying onlookers. This mischievous energy, reminiscent of Nicole Richie in The Simple Life, is embodied by none other than Kim Lee, the DJ and cast member of Bling Empire.

A marriage between The Hills meets Crazy Rich Asians, Bling Empire is Netflix’s smash hit reality TV series that has successfully spanned for three seasons. Featuring a diversity of Asians who were both born in Asia and/or raised in the United States, it bears a stellar cast who range from models to plastic surgeons, defying stereotypes of Asian Americans in reality TV. But while Bling Empire was not the first show to break ground, it took off successfully when its predecessors, such as K-Town, did not.

In season three, Lee brings back the same vibrant, chaotic energy. Like the cool older cousin you’ve looked up to during childhood, Lee is the dream girl you want to grab drinks with at Happy Hour and gossip about the boys you DM’d at every sleepover. Though her bubbly personality is a dominant trait, underneath it all is a soul with a heart of gold. She is a ride or die who wears her loyalty on her sleeve for the friends that protect her and is a friend who tells it like it is.

At a conference room in The London West Hollywood Hotel, Lee and I meet face-to-face for the first time ever. We catch up about the biggest perk of being single, going to therapy, why Kevin was trying to date her for a storyline, her friendship with Kane, and the real tea on why Kevin and Devon didn’t speak for many years. 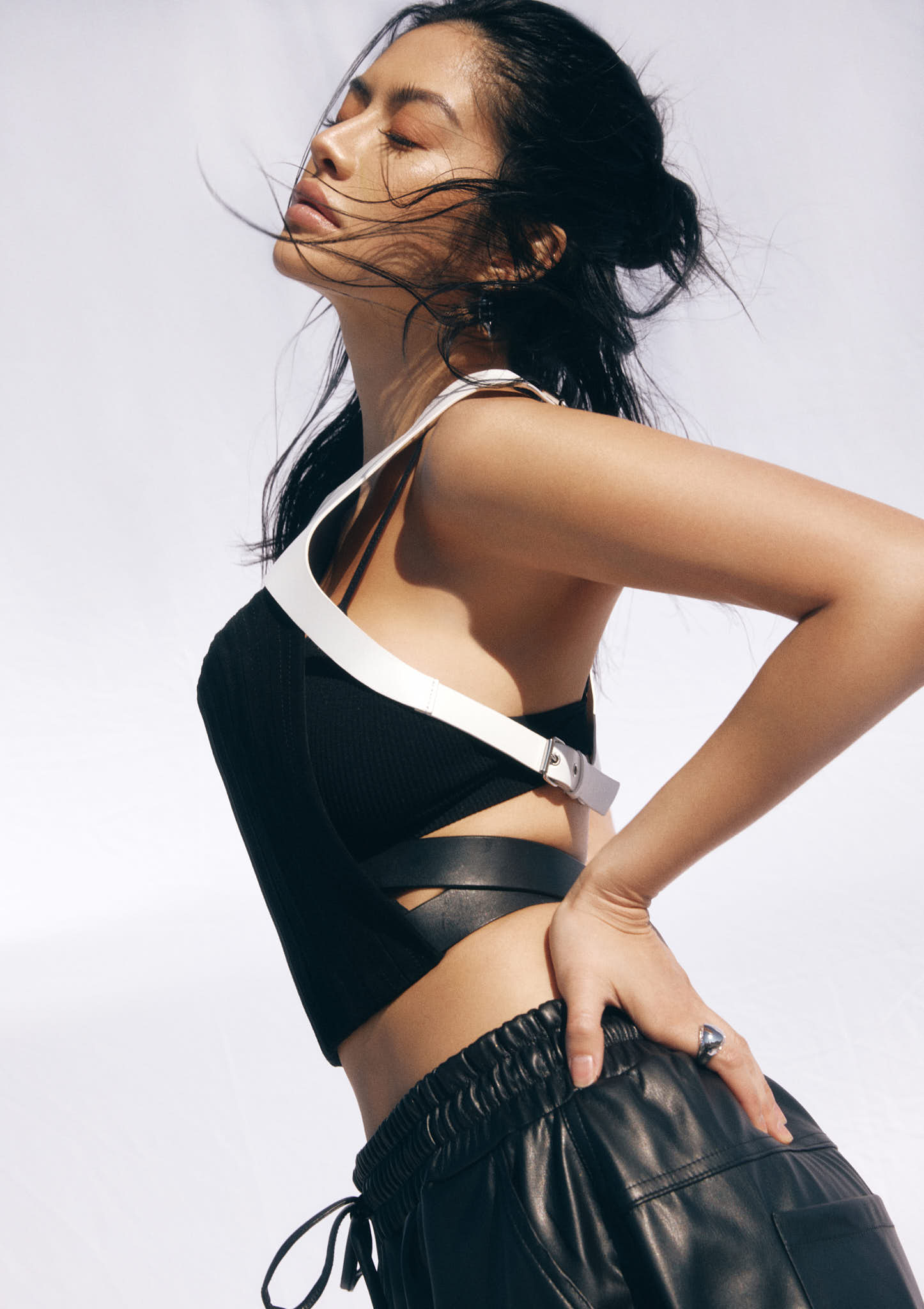 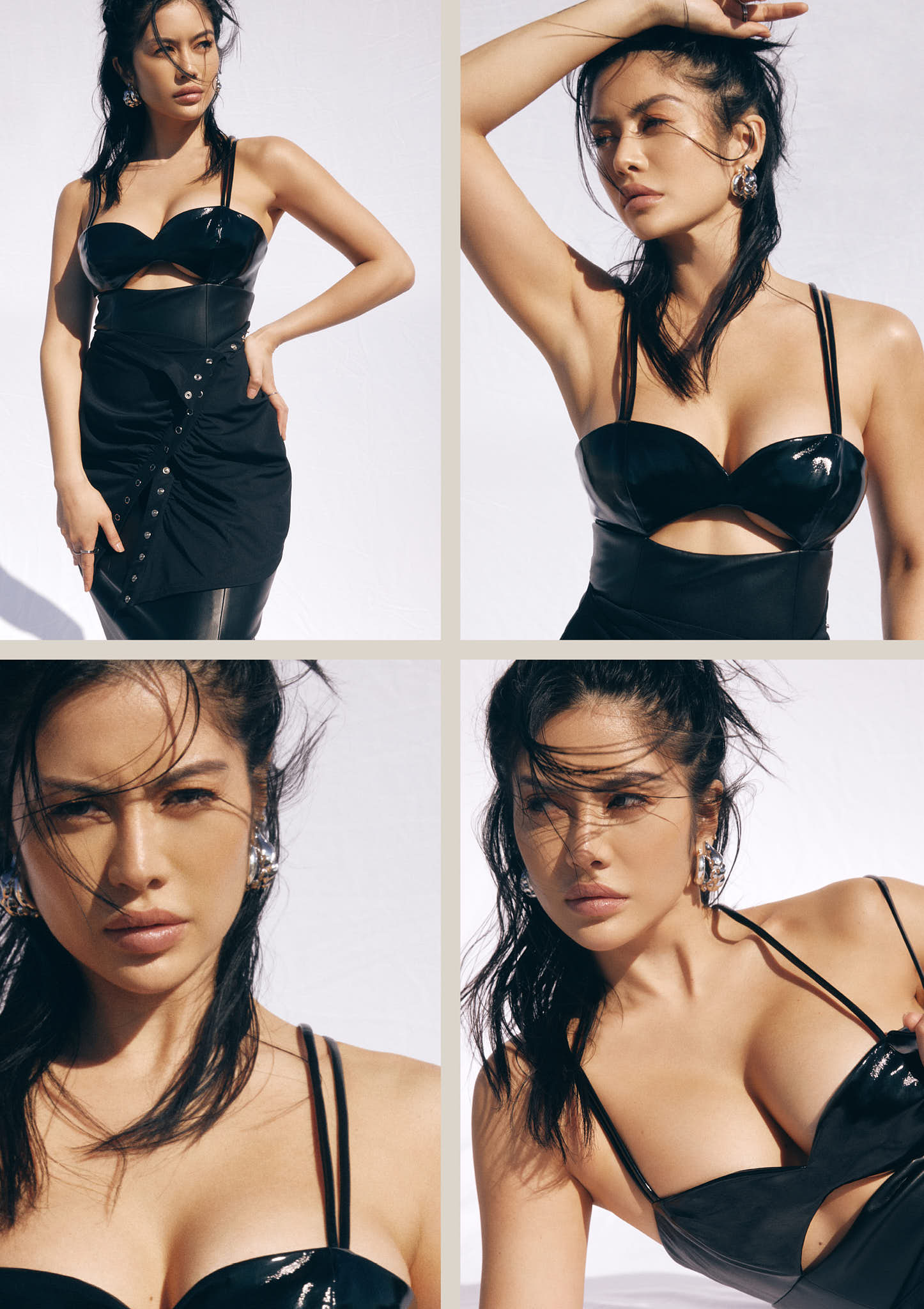 Michelle Varinata: We’ve seen your character develop from seasons one and two where your story was centered on your blossoming relationship with Kevin. This time, we see that you are focused on yourself as a DJ with your Vegas residency. How do you feel about taking some time away from dating?

Kim Lee: It feels really good to be honest with you. Back in the day, I was that girl that was so dependent on a relationship—like I had to be in a relationship. I needed somebody to be there all the time. My [last] relationship was a toxic one. It was one that changed me as a person. I wasn’t being myself and I held on for too long. I felt like what happened was that it made me lose confidence and I was losing trust with like, relationships and being on Bling Empire, meeting someone like Kevin and stuff. I watched myself and was like, “Gosh, I have a lot of healing to do.”

Season three, I feel like it has been helping me a lot. I finally went to therapy and was open to it. I used to be the person against therapy. Like, why am I talking to this random person? I'm in a better place now. I focus on my work and finding myself healing, which is really important. Being by yourself, I love my time alone. I wasn’t comfortable with being alone before and I realize: “Okay, I need to get myself right.” I don’t wanna get out there and date. Otherwise, it’s an ongoing pattern. I’m in a better place now. I’m beyond grateful for my residency at the Wynn. It’s mind blowing. I’m literally almost the only female there. Being a female in a male dominated industry isn't easy, you know. You can be very talented, you can be the best or whatever it is. It’s kinda rough when it’s a room full of guys in there sometimes. But it makes me feel great. I have fans coming up [and saying] I pave the way for Asian Americans. It makes you feel really good. This whole journey on Bling Empire has been crazy. It’s the first Asian American reality TV show that’s a hit and I feel like it’s just beginning for us.

KL: I didn’t want to. It’s embarrassing at first to be on TV and admitting that you have been cheated on. No one wants to go up there. But I felt like I got to face it and own it. I guess it helped me somehow, opening up about that. What have I learned from it? That’s the most important question for myself and I realize like, “Hey, it’s okay. Sometimes you gotta get hurt and everyone’s going to go through it sometime, learn from it and heal from it.” Try not to make the same mistake. The mistake I made was hanging on for too long. Sometimes, the relationship is not going to work out. For me, I have a history with this person and I didn’t wanna go. I’ve tried, tried, and tried. It’s not meant to be.

MV: For season three, it’s been revealed in the synopsis that you are either relieved or jealous that Kevin’s moved on. We see that you have admitted to restricting his DMs (jokingly). Can you tell us where you stand on your relationship with him?

KL: Right now, we are friends and if you can believe it, I am the person who gives him advice. I genuinely care for him. Especially for who he’s dating as he’s not from LA. He’s new to LA and on a hit TV show. Of course he’s going to have women flocking all over him right now. Listen, I want him to find true love. He deserves it and sometimes I look at him and I feel for him because his family is not here. He comes from an adopted family. I see something and he’s desperately looking for that love. It’s dangerous when you feel that way. You can attract the wrong people ‘cause you’re crazy for that love. He has mentioned to me that his ex-girlfriend [Devon Diep] did not respond to him for many, many years and rejected him because he wasn’t doing anything in life. Now all of a sudden, he’s back with that person. Now he’s on a hit show and all of a sudden she’s in love with him, I’m gonna leave it at that. That’s all. It’s none of my business and I genuinely hope it is real. If it’s real, great. I hope I’m wrong. That’s all.

MV: Wow! That’s a lot of tea for me to process.

KL: Yeah, I’m explaining from my point of view, you know. Part of when I brought Lewis [Tan] on to the show, part of me was being petty. I was getting [Kevin] jealous. At the end of the day I realized I was like, “I need to be straight up with this guy and just tell him how I truly feel” even though it would hurt him. It was him pushing me and pushing me to the edge where I’m like, “You’re not my type!” Stop forcing it. There’s been signs. It’s not like [there] hasn’t been signs. A lot of people were just like: “Why cannot she be straight up in the very beginning?” I did! He didn't listen. I got forced! [laughs]

KL: Was he playing it up for the show? I was like, “This is interesting.” Does he really like me or is he looking for a storyline? Is he just liking me because of what he sees? I don’t know [shrugs], you know.

MV: Anytime. You have a strong friendship with Kane, who felt that Kevin wasn’t the right guy for you. Since we saw Kane taking sides with you in season two, have both of you and Kevin reconciled in season three?

KL: We did. There is a scene where we all got together and sat down and expressed how we really felt. That line when he said, “I’ll do it again” when we were outside at the truffle party—Kane has just got my back. I appreciate him. It’s hard to genuinely find people who just got your back like that. On the Internet, people say, “Oh, he’s just jealous of you and Kevin”, but whatever it is, I feel like he genuinely cares for me and I’ve got so much love for him.

MV: I saw it the same way, too. He has every reason to look out for you.

KL: Right. Everyone’s got their own opinion and a lot of people were like, “That’s none of his business”, which I understand. But at the same time, if your friend doesn't tell you, that’s not really a friend. That’s about it. 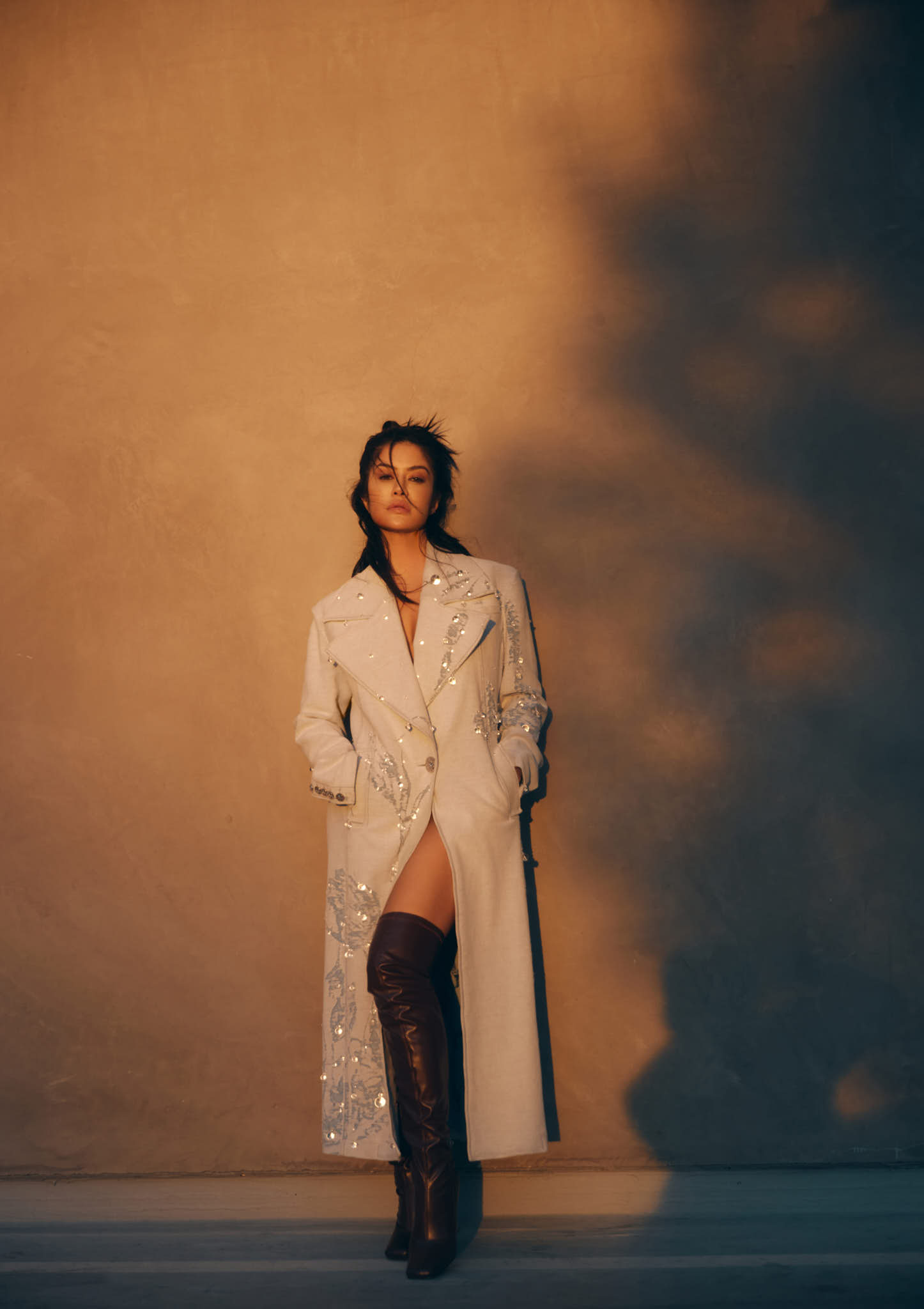 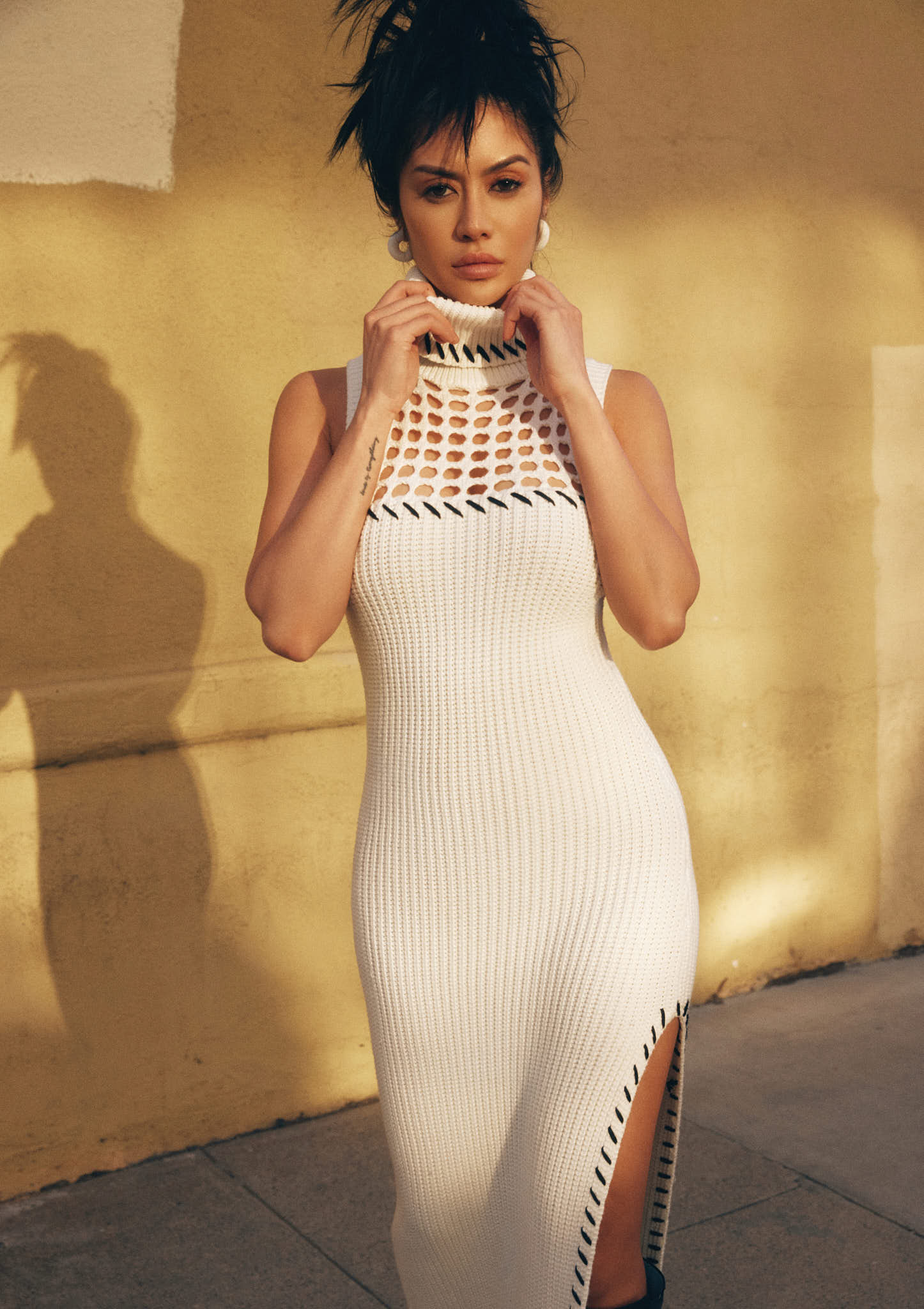 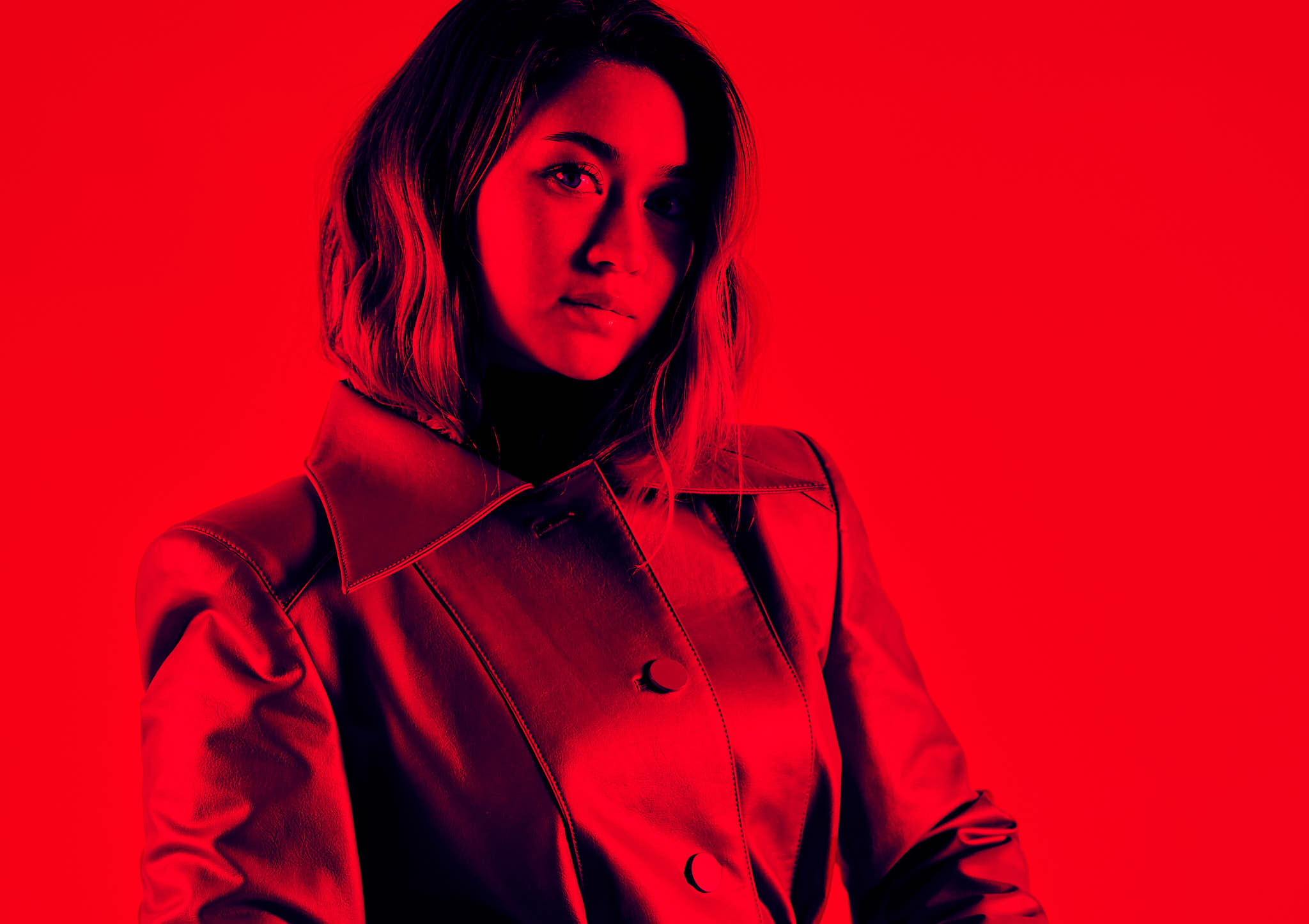 On challenging labels and finding beginnings in endings